How to Unlock a Computer Using a Smartphone - Gutted Geek

You can unlock your computer using the Galaxy smart phone on Android. For this, the fingerprint scanner built into the smart phone is used.

Galaxy series mobile phones can be used as a fingerprint sensor. Thus, using an Android smart phone, you can turn on a computer with Windows 10 – we collected all the details about this function for you in this article. 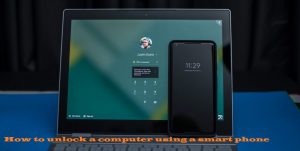 What does it take to unlock Windows 10 using Android?

The phone’s lock function is already familiar to users of Samsung Windows 10 tablets, such as the Galaxy TabPro S. This feature is now available on all Windows 10 computers.

In order to configure unlocking Windows using a smartphone, you need to install the Samsung Flow application from Google Play (on the smartphone) and Samsung Flow for Windows from the Microsoft Store (on the PC).

In addition, your Galaxy smartphone should not be “younger” than S8 and have at least Android 6 on board. In principle, this function also works with the Galaxy S6 and S7, on which Android 6.0 is installed.

For Windows 10, in turn, you will need to install the Creators Update for developers.

After that, you need to make sure that your computer has a Trusted Platform Module (TPM) crypto processor. This is a hardware component, it is located on the motherboard. Remember your motherboard model and find out if it is there.

If there is a TPM, enter the BIOS and check if its use is enabled. If not, turn it on.

Launch the Samsung Flow app on your smartphone. You will be guided step by step through the process of setting up a computer lock using a phone that is intuitive.

How to log in to Windows using an Android phone

Activate Samsung Flow on your smartphone and PC in the background. On both devices – PC and smartphone – turn on Bluetooth.

When you go to the Windows login screen, a prompt appears on the Galaxy smartphone screen that prompts you to log in using your smartphone.

Place your finger on the fingerprint sensor. It will be scanned and the data will be transferred to the computer. The authorization process will be processed and the Windows Welcome screen will appear.

In addition to unlocking Windows via Bluetooth, using Samsung Flow, you can configure to synchronize calls and messages with your computer. Then, each time the smartphone is paired with a PC via Bluetooth; this information will be transferred to Windows 10.